Q: How Do Solar Panels Work?
A: The process of solar panels turning sunlight into energy is complexed, so we’ll break it down to simplified terms here. Photovoltaic solar panels convert sunlight photons into direct current (DC) through their movement around a circuit. An inverter converts this electricity from DC to alternating current (AC) to match the country’s power grid. The AC powers your home or charges your car. Extra electricity is diverted back to the grid for use.

Q: What Are Solar Panels Made Of?
A: A typical solar panel is comprised of the following materials: Silicon solar cells, a metal frame (typically aluminum), glass sheet for casing, standard 12V wire, bus wire, and Plexiglas.

Q: Can You Elaborate on The Solar Cells?
A: Solar cells are often referred to as photovoltaic cells. They contain silicon and convert light into electricity by the photovoltaic effect. The atoms in the silicon solar cells are surrounded by electrons. The sunlight hits these crystals of silicon and electrons are ejected, bouncing around randomly. This ejection leaves an electron hole. When a bouncing electron finds this hole and recombines, it creates energy – which we capture as electricity. This resulting effect is a physical and chemical phenomenon… 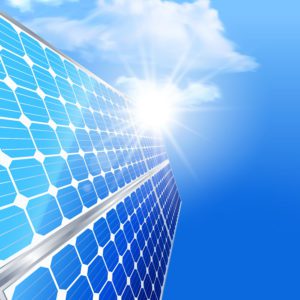 Q: …Did You Say A Phenomenon?
A: Yes, dubbed this by its founder Edmund Becquerel, the physical and chemical conversion of light to electricity happens when absorbing light causes an electron (or other charge carrier) to a higher-energy state. In a photovoltaic effect, the energized charge carrier is still contained within the material.

Q: What Is the Average Amount of Solar Panel Maintenance?
A:There is a very low amount of maintenance for solar panels partly due to no moving parts. It’s suggested solar panels should be inspected for dirt and debris a few times a year. In most cases, local companies will provide this service for a nominal fee.

Fun Facts:
• The Solar Impulse II was the first piloted fixed-wing aircraft to circumnavigate the globe using only solar power.  Its 16th month trip concluded on July 26th, 2016.
• The Tesla Model S P100D goes from 0-60 mph in a breathtaking 2.5 seconds.  It’s the fastest electric vehicle available to the public!